The importance of calling Ahead.

August 10, 2012 admin Uncategorized Comments Off on The importance of calling Ahead.

I went up to visit a friend in Boston this week.  When I go there I usually make it a point to visit my favorite Chinese Restaurant in Cambridge, Mary Chungs.  Mary Chungs is home to my favorite dish in the whole wide world, Suan La Chow Show.  Here it is in its lovely splendor:

Beautiful, isn't it?  Lovely pillow like wontons, in a spicy, savory sauce, resting on delicate marinated beansprouts.  Delicious.  Some people also like their Dun Dun Noodles, though I am not a fan because I don't like peanuts in my food (though I love peanuts alone, go figure).

Anyway, after dreaming of how my tasty Suan would dance on my tongue, we get there and find this:

We were very sad and wound up eating at an inferior place for lunch, but during lunch I saw on my phone that a place also in Central Square Cambridge also had on their menu Suan La Chow Show called Pu Pu Hot Pot, right across the street.  While I was eating I actually used my phone to order two of their Suans..

So we get there and wait and get my order, which weighs a ton.   Turns out their version of the dish is coated in a brown gloppy sauce and covered in my hated aforementioned peanuts.  As you can see, theres no way around them.

The wontons underneath were okay, and there was actually one or two bites of some pickled vegetables they put under there that were faintly reminiscent of Mary Chungs dish, but it was really nothing like it and extremely disappointing.

Even before I ate it, given the brick like quality of the bag, I was already disappointed and we were walking back by Mary Chungs.  Some guy rushes by us and tries the door and is shocked by the vacation notice as were were.  We said "yeah, the same thing happened to us."  He Said, "YEAH, BUT DID YOU DRIVE ALL THE WAY HERE FROM NEW YORK???!?!".  We were like, "No!  We took the Train here all the way from New York!".  Then I offered him a tin of the inferior Suan if he wanted it and he looked at us like we were Weirdos and walked away.

Make sure you call ahead to avoid disappoinment.  Mary Chungs will be reopened on August 15, 2012.

Oddly enough, This was not the first time this has happened to me!

Before all of America was fat, and perhaps influenced by Abba, but probably not, there was a Swedish explosion in America.  In South Florida, where I grew up, we had Sweden House.  Everyone was going overboard for Smörgåsbord.  I cannot recall if I actually ever ate at one, but I definately passed them.

Recently I ran across the top postcard for Fjords Smorg-ette.  Clearly on the West coast they knew those blurpin Californians would not get on bord with such a long name.

If I recall correctly, Sweden House restaurants ran all the way up the East Coast.  A quick search of Fjords yielded only a sole vacant location with a facebook page.  If you have time, you should search youtube for Sweden House commercials.  They are 70s perfection.  I wonder what caused the Smorgas-armageddon?  Though we still have places like Golden Corral, they just don't seem to have the same charm.

Sweden House at My Florida History. 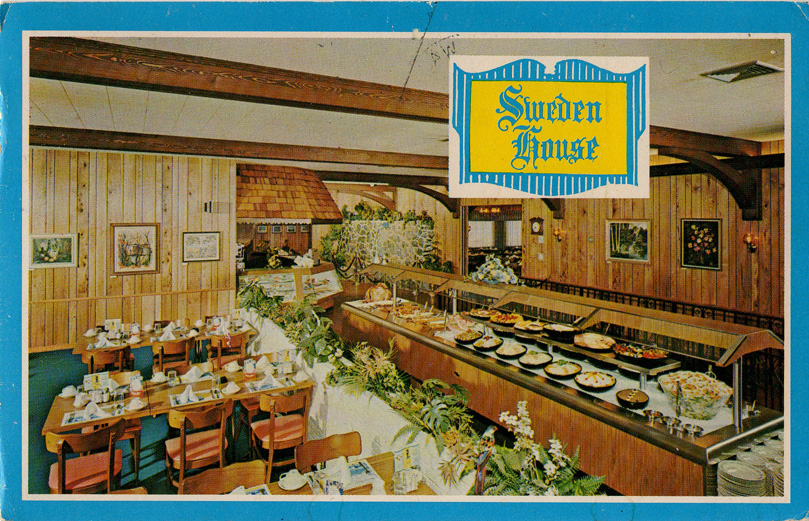 Manolo-Miami Beach (not the shoes)

August 6, 2012 admin Food, Travel Comments Off on Manolo-Miami Beach (not the shoes)

Theres an Argentinian Churro joint I enjoy visiting in the North Beach area of Miami Beach called Manolo.  I liken it to an Argentinian Dennys and I thought it was a huge chain.  Turns out there are only a handful of them.  I love these Tin Plate sandwiches, lightly toasted crustless sammies with things like olives and ham.  I've not had the placemat recommended bacon pizza.  The desserts are phenomenal or should I say FLANnomeneal!

August 5, 2012 admin Food, Music, Travel, Uncategorized Comments Off on Isalys-An endangered former chain
Home of the Chipped Ham sandwich, only a handful of these remain.  We found this one from the wonderful "Sandwiches you will like" PBS show.  Word just came that they are now being bought out.  The claim is that they will still sell Isalys specialties, but somehow it will not be the same.

Mario the Bakers-one of two reasons to visit Miami

One of the few things that makes me keep my sanity when I visit home in Miami, Mario the bakers used to have a classic stand alone restaurant on the West Dixie Highway, but has now moved to US1.  The Garlic Rolls, perhaps the best in the Universe remain Amazing, but now its in a shopping Mall.  Progress

We are in the process of moving the old site to a fancy WordPress site!

Trashy Travel was started in the late 90s as Hipster Travel when it was hard to pick out the noise on the internet to find the few select things that we like to do when we visit anywhere.  During the great hipster backlash of the mid 00’s it became apparent that a name change was in order.  Despite the dictionary defining hipster as “a person who keeps up with all the latest happenings, particularly in modern jazz”, the disdain for a new type bearing this moniker has been made known, even from folks suspiciously sporting Goatees and trucker hats.  We won’t argue, thus we bring you Trashy Travel: A select collection of travel tips and links for the unconventional traveler.

We Like:
Due to the downfall of geocities, which hosted the original site, we are currently in a state of rebuilding.  There are many outdated links and party culture is hard to keep up with when you are a small operation.  There are still unformatted pages and unchanged photos.  With your help, we hope to get everything more current, and eventually, more navigable.  The main thing about this site, is that is it a collection of places that WE want to visit when we travel, and hope you find them interesting as well.  Its just a list, and like all lists, you may find some things out of date, but it is a good starting point.
Trashy Travels!