A friend of mine posted an article about the closing and razing of a Nathans in Yonkers.  Its the second largest Nathans in the US and I assume the last one that had an arcade inside.  We had such a location at 170th and Collins in Sunny Isles Beach Florida growing up but closed sometime in the 70s. 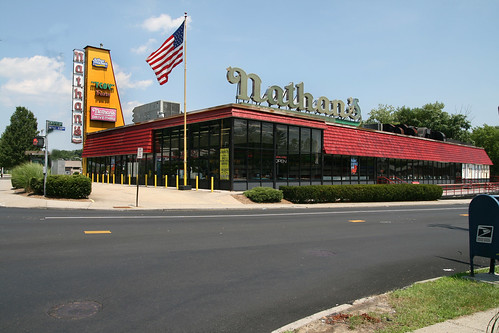 A little research led me to the fact that this Nathans was originally a restaurant called Adventurers Inn, and that there were at least a couple of them, including one that was a Amusement Park in Flushing, Queens.

Turns out the amusement park was across the street from an airport.  Eventually both were abandoned and took years before they were finally razed.

Adventurers Inn before it was bulldozed.  I have no idea why they didnt sell the rides.

I also found out about a park called Nunleys on Long Island.  The park closed but the carousel was moved.

Another Adventurers in on Long Island is now an Adventureland.

Some old photos from Flushing park in the 70s and other cool things.

An article on Fairyland In Queens, now a mall.

Memories of the Jersey Shore

Day Trip to Midwood and Gravesend

Chili Dogs, Burgers, BBQ and more in Georgia, The Carolinas and Virginia